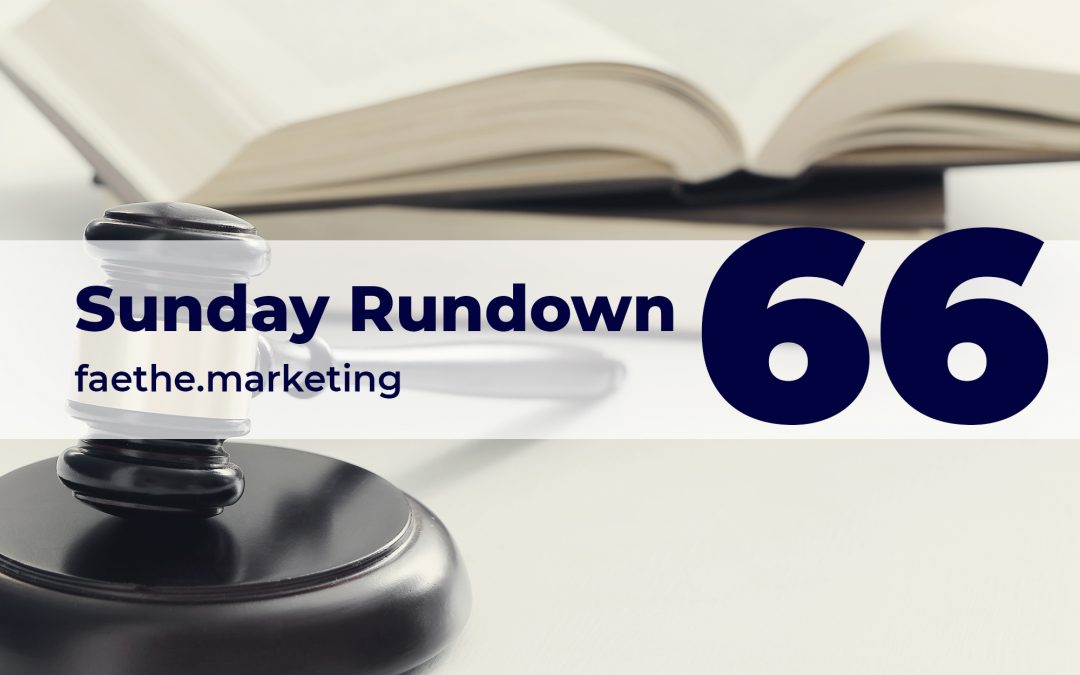 Are you ready? Are you all nice and comfortable? Good. Let us share with you the latest news in our Sunday Rundown #66 🙂

This week, Facebook CEO Mark Zuckerberg, Google CEO Sundar Pichai and Twitter chief Jack Dorsey will front a House Energy and Commerce hearing over proposed changes to Section 230, with a view to improving the ways in which online platforms address key concerns relating to free speech, moderation and the spread of harmful information on their platforms.

All of the tech giants have opposed reforms to Section 230. They say that any significant change to the law will effectively cripple the free web. It will force them to significantly limit speech, in order to avoid potential legal challenges. But as highlighted in various discussions, there are ongoing concerns that the platforms are not doing enough to stop the spread of misinformation and hate speech. This could be sparking broader societal division. But others argue the opposite. They argue that platforms are effectively working to support their own agenda in their moves to censor and restrict speech.

You and the Algorithm: It takes two to tango

In a recent article for The Atlantic, Adrienne LaFrance compared Facebook to a Doomsday Machine. It is “a device built with the sole purpose of destroying all human life”. In the Netflix documentary The Social Dilemma, the filmmakers imagine a digital control room where engineers press buttons and turn dials to manipulate a teenage boy through his smartphone. Harvard social psychologist Shoshana Zuboff in her book Surveillance Capitalism paints a picture of a world in which tech companies have constructed a massive system of surveillance. It allows them to manipulate people’s attitudes, opinions and desires.

In each of these dystopian depictions, people are portrayed as powerless victims, robbed of their free will. Humans have become the playthings of manipulative algorithmic systems. But is this really true? Have the machines really taken over? Nick Clegg (VP of Global Affairs, Facebook) published a great text in which he talks about you and the algorithm.

LinkedIn’s looking to help users share more of their personal story, and maximize their on-platform presence. It is adding a range of new features for individual member profiles in the app.

Firstly, LinkedIn’s adding a new video cover story option. This will enable users to add an introductory video that people can view when they visit their LinkedIn listing.

And lastly, in what may be the most significant of the new additions overall, LinkedIn’s also launching a new ‘Creator Mode’ for profiles, which will enable users to showcase their on-platform activity and engagement in a whole new way.

YouTube has announced it’s experimenting with hiding dislikes to discourage “dislike mobs” from deliberately downvoting videos from creators and channels. The experiment is a different implementation than the solutions the company had previously discussed, but it is similar to other attempts platforms like Instagram have taken to nip targeted attacks in the bud.

In the current setup, stats for both likes and dislikes are viewable in a creator’s individual YouTube Studio page, but only likes will be displayed publicly on a video. YouTube says that dislikes can negatively impact a creator’s well-being and “may motivate a targeted campaign of dislikes on a creator’s video.”

Thanks for taking the time to read our Sunday Rundown #66. If you have a story that you want to see in this series, reply to us below or contact us.