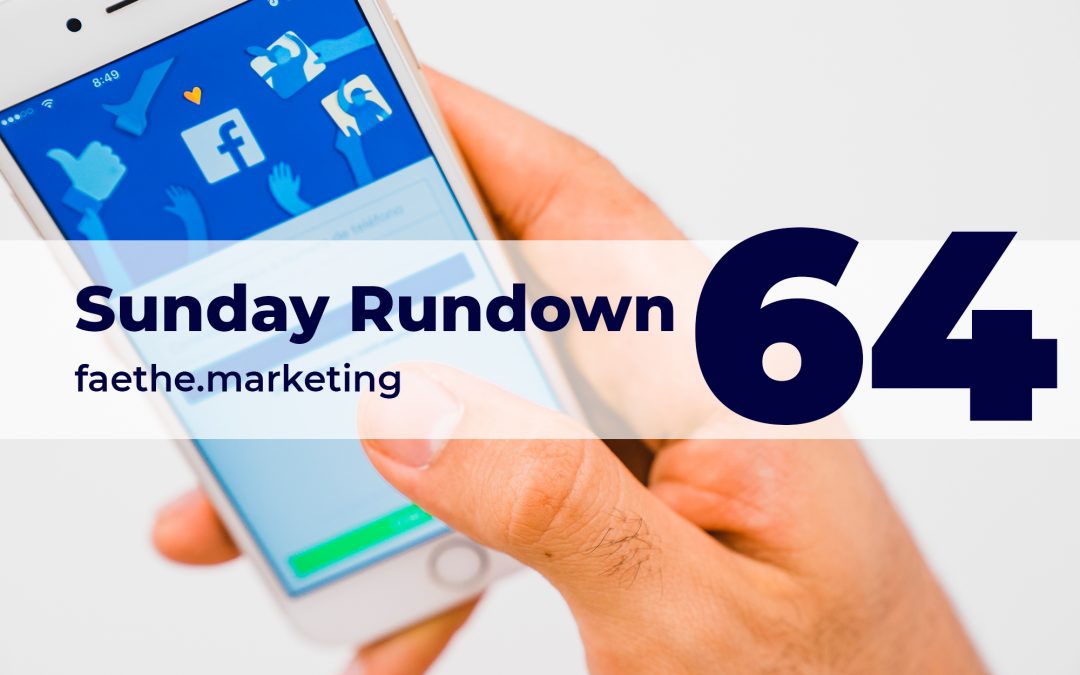 Welcome back to Sunday Rundown #64 🙂 We are bringing you the latest news from the digital world!

This week, Facebook’s ‘New Product Experimentation’ team appears to have launched a new, live test of its coming ‘Super’ app. This app the challenger for Cameo, the app through which you can pay for celebrity shout-outs within video chats.

Viewers can tip creators by buying them digital gifts, or pay to “appear” alongside a creator during the live-stream to ask a question or take a selfie, according to a person familiar with the new feature, who spoke on the condition of anonymity because the product hasn’t been announced publicly. Creators will also be able to sell merchandise or other products alongside the live-stream.

It is still early in Super’s development, so there is not yet a full scale of the app’s potential functionality. But the features displayed in this new test will no doubt be a concern for Cameo and its growth plans.

It seems Sunday Rundown #64 revolves around Facebook. Facebook’s newsletter tools are thought to include features for helping writers build a following using the social network. They will also help them curate their email lists, and manage their paid subscriptions.

The news comes as interest in newsletters is booming. Newsletter service Substack boasted over 250,000 paying subscribers across its service as of September last year. And just this week Twitter acquired newsletter rival Revue. This is more than enough for Facebook to cook up its own solution as a response to these journalists’ decision.

Google Chrome is ditching third-party cookies for good. If all goes according to plan then future updates to the world’s most popular web browser will rewrite the rules of online advertising and make it far harder to track the web activity of billions of people.

Change is necessary. But such change will likely mean that more advertising money is spent on platforms such as Facebook, TikTok and YouTube, where targeting within a closed ecosystem will be easier.

More on the cookies in Sunday Rundown #64. Firefox is doing the same as Google Chrome, but not quite. Total Cookie Protection confines cookies to the site where they were created, which prevents tracking companies from using these cookies to track your browsing from site to site.

Twitter announced a pair of big upcoming features today: the ability for users to charge their followers for access to additional content, and the ability to create and join groups based around specific interests. They’re two of the more substantial changes to Twitter in a while, but they also fit snugly into models that have been popular and successful on other social platforms.

The payment feature, called Super Follows, will allow Twitter users to charge followers and give them access to extra content. That could be bonus tweets, access to a community group, subscription to a newsletter, or a badge indicating your support.

Deepfake videos and how to spot one

New deepfake videos of actor Tom Cruise have made their way onto TikTok under the handle @deeptomcruise, and boy do they look real. They’re so realistic, in fact, it’s possible that you wouldn’t even know they’re computer-generated had you not been alerted by the account’s handle. And they were made using not much more than sample footage of Cruise and deepfake technology that is getting easier for anyone to use.

In a series of tweets, Rachel Tobac, the CEO of SocialProof Security, warns that deepfakes like @deeptomcruise threaten to further erode public trust in a world where media literacy is poor and people already can’t agree on what’s true or false. Like the black and gold dress, where one person might notice giveaways that the Tom Cruise videos are synthesized, another might not know the signs of a fake and swear up and down that they’re real.

Deepfakes are especially dangerous because video is widely considered indisputable evidence. A prominent individual could be deepfaked into performing a hate crime, or a person who legitimately committed an unjust act could use deepfakes to craft an alibi.

Thanks for taking the time to read our Sunday Rundown #64. If you have a story that you want to see in this series, reply to us below or contact us.