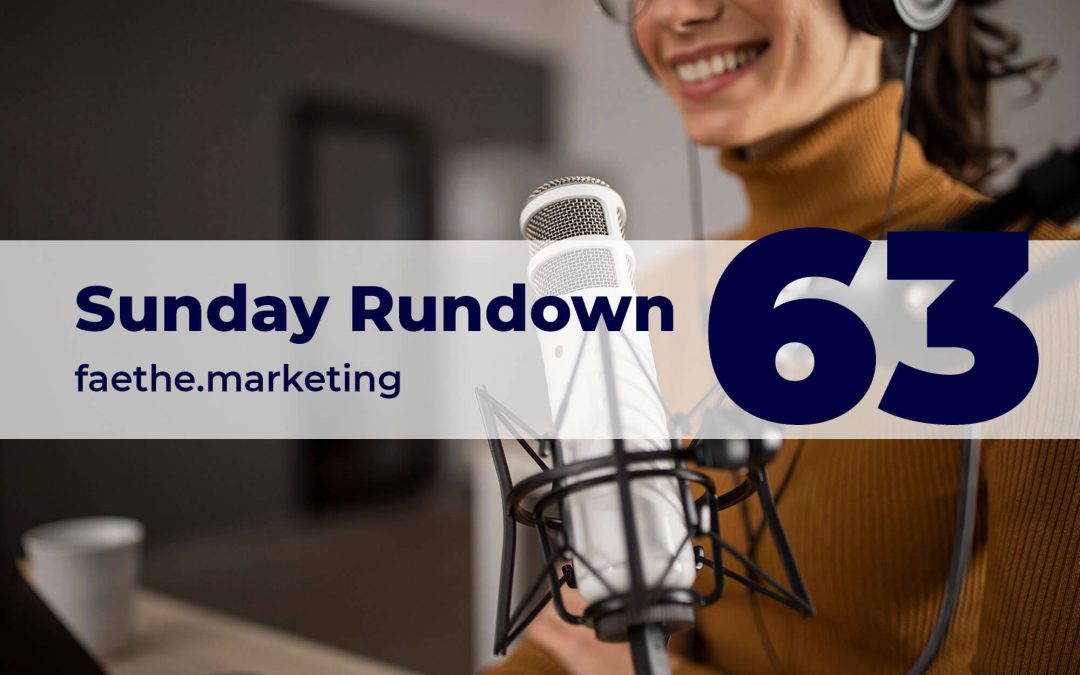 We are leaving a cold and snowy (in some parts of the world) week behind us. And a few interesting happenings that deserved to make it onto Sunday Rundown #63 🙂

Spotify wants to suggest songs based on your emotions

Spotify has patented technology that will allow it to analyse your voice and suggest songs based on your “emotional state, gender, age, or accent”. The patent, which was filed in 2018 and granted on 12 January, would allow the streaming giant to “make observations” about a user’s environment and emotions using speech recognition technology.

Should marketers be considering Clubhouse as part of their digital marketing strategy?

Clubhouse is the hot new social app of the moment, sparking buzzy chatter among social influencers and a raft of FOMO-inducing tweets of Clubhouse conversation highlights. But is there marketing potential within the many rooms of the Clubhouse app?

Consequently, the answer to that largely depends on your business, and what you are looking to achieve. Generally, Clubhouse has shown significant potential for boosting users as thought leaders and expanding their audience within your niche.

Mark Cuban is getting in on the audio and podcasting hype. In detail, alongside co-founder Falon Fatemi, he is planning to launch Fireside, a “next-gen podcast platform” that facilitates live conversation. Specifically, the app idea is similar to the buzzy live audio startup Clubhouse, except with the ability to natively record conversations. Additionally, a source close to Fireside says the app plans to launch publicly this year.

The Super Bowl 2021 commercials were created during impossibly trying times—with productions invariably impacted in large and small ways by the pandemic and global recession. Certainly, it took a lot of courage and persistence, and a certain amount of blind faith, to proceed from rough concept to final cut. Here is Ad Age’s Super Bowl 2021 ad review.

Coca-Cola with a revolutionary change

The Coca-Cola Company has announced it will be trialling a paper bottle prototype in a limited run of 2,000 later this year. To explain, the test sales of the plant-based beverage AdeZ will be conducted in Hungary through the e-grocery retailer Kifli.hu. Coca-Cola emphasizes that the bottle is still in development as the company assesses the prototype bottle’s performance, durability, and ability to protect its contents. Furthermore, Coca-Cola wants to go ahead with consumer testing to determine how it performs in the real world and measure how well people take to the new receptacle.

Thanks for taking the time to read our Sunday Rundown #63. If you have a story that you want to see in this series, reply to us below or contact us.

p.s. We are reducing are Sunday Rundowns to every other Sunday. So tune in on the 7th and 21st of March for the next batches of updates from the digital world! 🙂