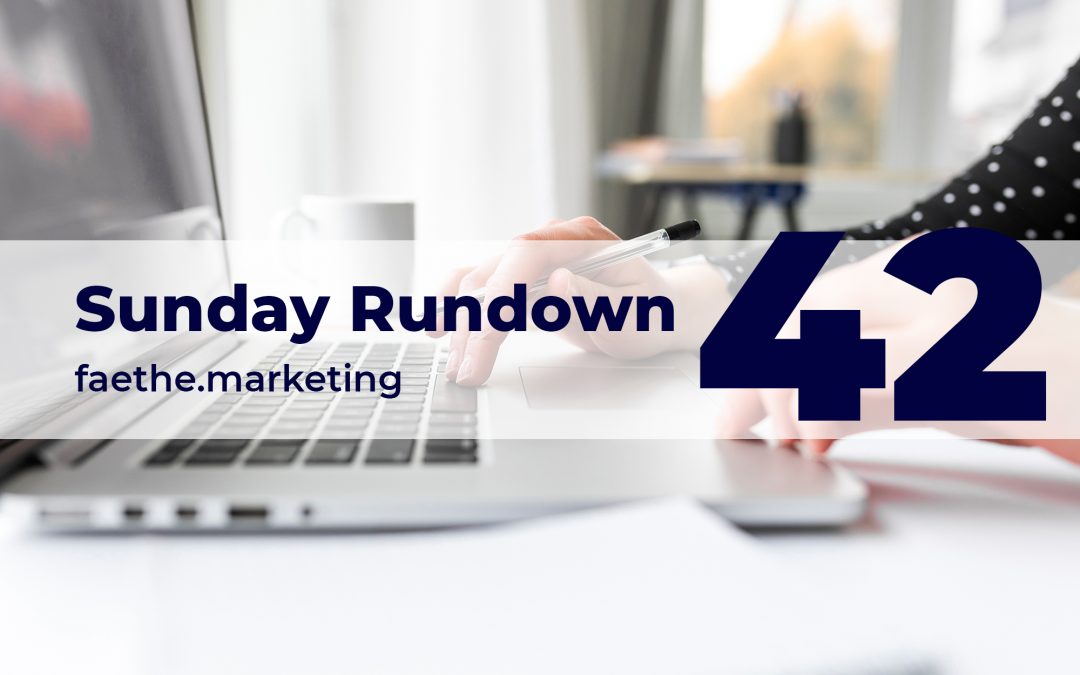 Get ready for a fresh dose of news in our Sunday Rundown #42 🙂 Enjoy!

After we shared the news that Apple banned Fortnite from the App Store in our last Sunday Rundown it was expected to see other companies rebel against Apple for the same or similar reason.

A week after the incident with Fortnite, the founder of WordPress said that Apple cut off updates to his completely free app because it wants 30%.

Apple reminded everyone that in-app purchases are mandatory if the app gives users access to content, subscriptions and tools from other platforms or websites. But the WordPress app does not sell anything. In detail, if you bought something from WordPress.com you cannot use it in the app.

Two days later, Apple issues a public apology and says there is no need for WordPress to include in-app purchases.

We believe the issue with the WordPress app has been resolved. Since the developer removed the display of their service payment options from the app, it is now a free stand-alone app and does not have to offer in-app purchases. We have informed the developer and apologize for any confusion that we have caused.

TikTok sues the US government over its forthcoming ban

TikTok wrote on their company blog that it will sue the US government over Trump’s ban. Specifically, the company says that Trump’s administration has ignored TikTok’s many efforts to deal with the concerns. Instead of a civil conversation, Trump declared the app as a national threat. And that is because of its link to the Chinese government.

We strongly disagree with the Administration’s position that TikTok is a national security threat and we have articulated these objections previously.

Part from the blog posts

The lawsuit notes that TikTok’s actions were already known to the US government due to the national security review by CFIUS. The Committee on Foreign Investment in the United States made a review when ByteDance acquired Musical.ly  in 2017, becoming TikTok. As part of that review, the government examined TikTok’s documented security practices and came to the conclusion that the deal could proceed.

Of course, TikTok may not have to actually win this latest legal challenge to remain in operation, it understands. To explain, if Trump loses the November election, the new administration could take a different tactic with regard to how it handles the TikTok situation. Perhaps even rescinding the order entirely.

Facebook is determined to heap the pressure onto TikTok wherever it can, and this week, it launched a new test of a feed of short-form video clips in its main app, exclusively in the Indian market, where TikTok is currently banned.

But of course, Facebook isn’t the only competitor looking to replace TikTok in India. YouTube is giving more Indian users access to its own TikTok-like ‘Shorts’ feature. Will TikTok get its Indian audience back?

KFC is temporarily dropping the ‘It’s finger lickin’ good’ slogan it has used in its advertising for 64 years. It launched its first global campaign in response to the coronavirus pandemic. They believe the slogan is “inappropriate” at a time when hygiene is top of mind and so is dropping it temporarily, but is on the lookout for an interim replacement.

The campaign launched on Monday, and it shows various images of KFC – including an outdoor ad and a number of shots of its infamous bucket of chicken – with the ‘finger lickin’’ part of its slogan pixelated out. It ends with the line: “That thing we always say? Ignore it. For now.”

Thanks for taking the time to read our Sunday Rundown #42. If you have a story that you want to see in this series, reply to us below or contact us.