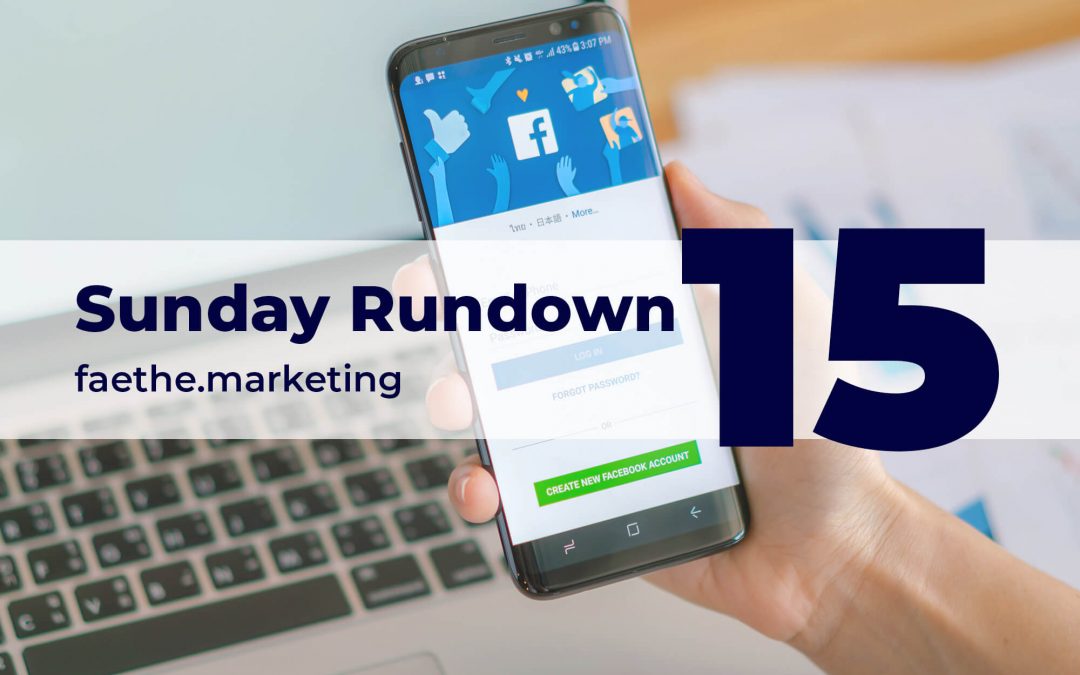 It is time for the first Sunday Rundown of 2020. Sit back, relax and enjoy the content we gathered for you today.

First up in our Sunday Rundown #15 is none other than Facebook.

We got Trump elected and it may happen again

A Facebook executive who backed Hillary Clinton’s 2016 election campaign told colleagues in an internal memo last month that the platform could ultimately be responsible for President Trump’s reelection.

In the memo, Facebook VP Andrew Bosworth wrote that the Trump campaign’s use of Facebook’s advertising tools were responsible for Trump’s win in the 2016 presidential election. The company’s political advertising platform, he added, “very well may lead to the same result” this year. Of course, this is not about malpractice. It is about the incredible strategy from the man responsible for the campaign: Brad Parscale.

The memo was first reported Tuesday by The New York Times. Soon after, Bosworth posted the memo to his public Facebook profile, noting that “it wasn’t written for public consumption due to lack of context.

In November, Twitter announced a draft policy on deepfakes and began soliciting public input. And on Monday night, Facebook announced that it would ban certain manipulated photos and videos from the platform.

The new policy (or the deepfakes ban) will apply to advertisements as well as regular posts. But there are several obvious workarounds.

Find out what is new with Google.

What is Google Discover, and how can you increase your chances of being featured?

Google Discover is the reincarnation of Google Feed, its personalised, mobile-optimised smart feed first introduced in December 2016, which was aimed at helping users keep up-to-date on topics and events of interest. In mid-2017, the Google Feed got an update and an algorithm upgrade. In September 2018 it got a more thorough refresh and rebrand, re-emerging as Google Discover.

Recently, Google’s been sneaking into the ability to enable new image extensions. These would allow advertisers to display relevant images alongside their search ads!

Google’s newest image ad extensions are a crafty way to add a little excitement to any drab text ad. As they roll out to more advertisers, be sure to add these image extensions to your Google Ads accounts and monitor their performance to see all the new customers they bring to your site!

The dawn of a new influencer economy

Last but not least our Sunday Rundown #15, we are going to talk about the influencer economy.

Social commerce is transforming platforms into the new mall. Instagram already enables brand owners to sell directly within the app, and now influencers are looking to get a slice of the action. Soon, influencers will be selling directly on established platforms – either their own products or products from preferred brands.

Instagram is already testing ‘Shopping from Creators’ with select influencers having access to its ‘checkout’ feature to make transactions easier and save influencers’ time. If the traditional social platforms don’t provide the right experience, or if commercial arrangements aren’t attractive enough, other platforms will. Some, like Depop, already are.

As well as selling things, influencers are also exploring ways to sell access to themselves or their content and creative output. Some are charging people to be added as ‘close friends’ on Instagram, for example. But there are also platforms that enable influencers and creators to build membership-based businesses.

Tips and gifting are another monetisation opportunity being explored by influencers active in more of an entertainment environment, including social entertainment platforms such as Twitch or TikTok. As influencers monetise by becoming retailers and creators through tips and gifts, or paid membership businesses, the obvious question is: where’s the opportunity for brands?

The answer lies in updating their understanding of and approach to the influencer economy. Without a doubt, the influencer economy is changing. For brands wanting to continue to harness influencers’ power, fresh challenges must be addressed. Advertising metrics will be needed that are more appropriate to influencers’ emerging monetisation strategies. But make no mistake, new opportunities await those that understand and respond to the market’s shifting dynamics.

Thanks for taking the time to read our Sunday Rundown #15. If you have a story that you want to see in this series, reply to us below or contact us.