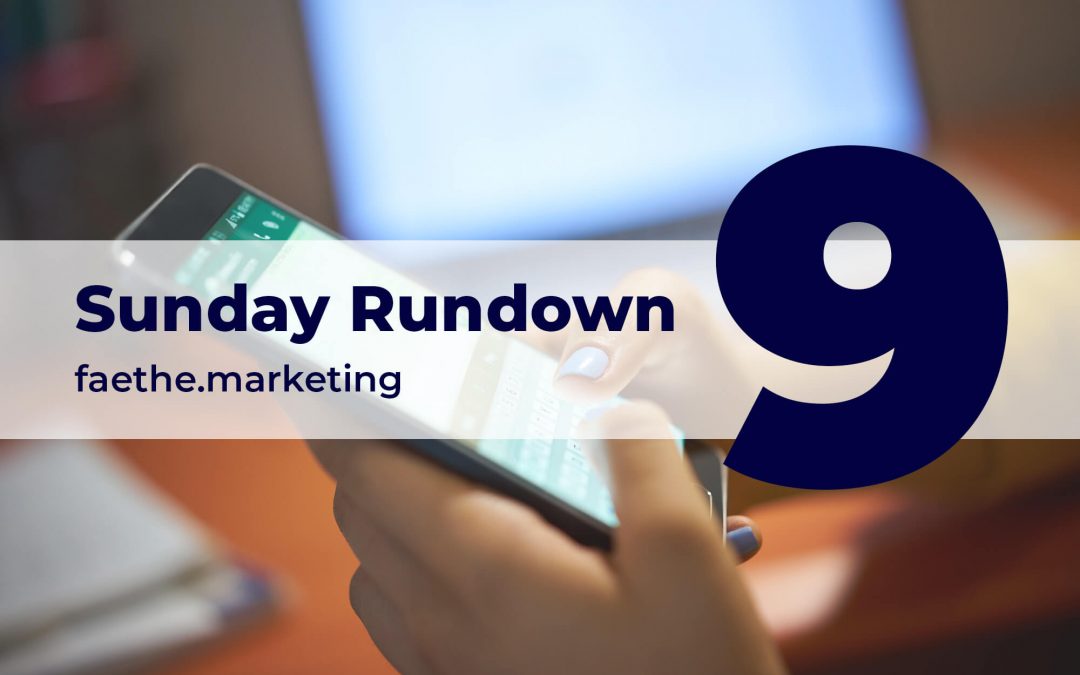 Scroll, click and read.. We have gathered some pretty interesting links and updates for Sunday Rundown #9!

Our headliner for Sunday Rundown #9 is about the new product catalogs from WhatsApp Business.

Facebook-owned WhatsApp is taking the next step towards monetization with a new option that will enable businesses to better showcase their products via the WhatsApp Business app. Brands will now be able to utilize product catalogs in their listings. This will help provide more information about, and images of, the items they offer.

WhatsApp’s new catalog feature is ​available to businesses in Brazil, Germany, India, Indonesia, Mexico, the U.K. and the U.S. since this Friday, with a broader roll-out coming soon.

In spite of all the scandals and generally bad reputation for the past few years, Facebook announced on Monday that it will rebrand itself. In the upcoming weeks we will be seeing a new, colourful logo with all capital letters.

But why FACEBOOK? The new logo proves the company’s worthiness. It is designed with “clarity and openness” in mind, with harmonized capital letters. But that is not all! FACEBOOK uses “dynamic” colours which transform the logo into the colours of its environment.

In other words, Facebook is distancing itself from the hated platform it actually created. So when foreign powers interfere with the 2020 elections. Mark Zuckerberg can tell Congress: sure, Facebook has its problems. But FACEBOOK is doing just fine.

Adobe, Twitter and The New York Times Company announced a new system for adding attributes to images and other type of content. This means there will be a tool which will record and save data about the artist that created the piece of content. The tool will also show whether or not that content has been altered by someone else. Then it will let other people and platform to check that data.

Adobe showed off a prototype in Photoshop. But many of the details are still in flux and we do not know when the system will be available. The project is part of the Content Authenticity Initiative, and the participants will attend a summit about the system in the following months.

Based on what Adobe teased, the tool for adding attributes is part of metadata that can be attached to a file. Adobe doesn’t describe precisely how it will keep the tag secure or prevent someone from copying the content in a way that strips it out.

Fast access to applications and services with .new from Google

Who does not love shortcuts? About a year ago, G Suite created the following: docs.new, sheets.new, and slides.new. These shortcuts enable users a faster and easier way to open a new document, spreadsheet or presentation.

This has inspired Google Registry to release the .new domain extension as a way for people to perform online actions in one quick step. And now any company or organization can register its own .new domain to help people get things done faster, too.

The last news on Sunday Rundown #9 is about Reddit.

Reddit is one of the most powerful forces that has an influence on almost the entire internet in a way that no other platform does. In comparison to other social media platforms, Reddit is relatively untouched by media and advertising agencies. This sets up a barrier for brands that want to impose their power and take advantage of the community’s influence over the internet.

With the goal of helping other brands and marketers to get to know this unique – and highly protected – social platform, We Are Social made a Reddit-first campaign and has drawn some pretty interesting conclusions.

Thanks for taking the time to read our Sunday Rundown #9. If you have a story that you want to see in this series, reply to us below or contact us.